Here is a still from a commissioned painting commemorating the 1996 Game 7 series winner against Wayne Gretzky and the St. Louis Blues. This goal marked Yzerman as Detroit’s most famous sporting hero, and the goal as his signature moment. Named captain of the Detroit Red Wings at age 21, Yzerman personified the drive, work ethic and desire of Detroit’s Stanley Cup teams during the modern era. 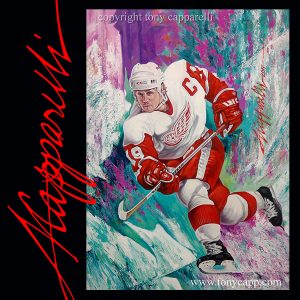 You will also notice the studio’s most famous visitor…our dog “Sophie”!

This Fall The Fashion Institute of Technology will be hosting “Tony Capparelli’s Art of Sport” at Gallery FIT, located on 27th Street and Seventh Avenue in New York City.