The watercolors have been digitally stitched together for the image you see above, commemorating this historic event in Hudson County, NJ.

Included in the sketch is James Braddock, an early sketch of his family, along with images of boxing legends Gerry Cooney, Chuck Wepner and NJ Boxing Hall of Fame President and historian Henry Hascup.

Thomas A.DeGise Hudson County Executive is also featured in the artwork, as luminaries attending the event decorate a portion of the third panel.

“As it turns out, Braddock’s grave is within a very short drive from my studio”, says Capparelli.

“… it was an honor to be a part of this ceremony, honoring New Jersey’s Cinderella Man” 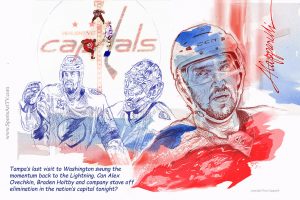